The first film in the long running 3 Fantastic Supermen series. Brad Harris stars as an FBI agent who enlists the help of two other agents, Tony Kendall and Nick Jordan, donning red bullet-proof tights, utility belts and suction cups to walk up walls and fight crime. Their mission is to go after a criminal mastermind who is duplicating gold bricks and printing counterfeit money. Later, the evil doctor even creates clones of the Supermen themselves. Features incredible stunts performed by Nick Jordan. Also with Gloria Paul. (In Italian language).

Nick Jordan, aka Aldo Canti, was a Roman stuntman at Cinecittà studios who gradually became a minor leading man in a few Italian B-films. He was reportedly linked to the Italian underworld and was found murdered in the early 1990's at Rome's Villa Borghese park.

This film comes from a rare widescreen import print, which has much better picture quality than the English language version. 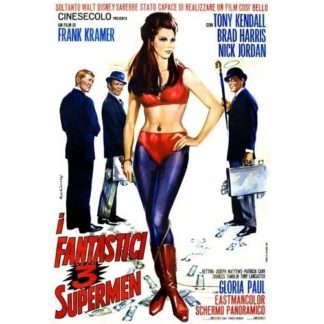