The second and rarest entry in the 3 Fantastic Supermen series. Here the supermen travel to Japan to investigate the theft of a miniaturization ray, under the threat of prosecution if they fail. Along the way they are seduced by sexy female counter-agents and set upon by groups of thugs who fire tons of rounds into the impervious material of those trademark red suits. It ends with the supermen themselves getting miniaturized and eventually outsmarting the villains. Stars George Martin, Salvatore Borghese (aka Dick Gordon) and Willi Colombini (aka Willy Newcomb). Also with Gloria Paul and Elisabetta Wu. (In Italian language).

NOTE: This is the only 3 Fantastic Supermen film which was never released in the U.S. (the reason for this remains unknown), which means there is no English language version available anywhere.

British actress Gloria Paul was considered for the part of Domino in Thunderball (1965). Steven Jay Rubin's 1981 book The James Bond Films features a picture of Paul posing in a “Domino” bathing suit. 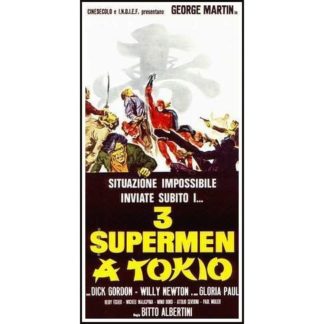