In a lower-class London community of small shops, open-air vendors and flea-marketers, Joe, a small boy, lives with his mother, Joanne, who works in and rooms above the Kandinsky tailor shop. Joe is innocently and earnestly determined to help realize the wishes of his poor, hard-working neighbors. Hearing from Mr. Kandinsky the tale that a captured unicorn will grant any wish, Joe uses his accumulated pocket change to buy a kid with an emerging horn, believing it to be a unicorn. His subsequent efforts to make dreams come true exemplify the power of hope and will amidst hardship. Stars Diana Dors and Joe Robinson.

Featuring Primo Carnera, in one of his few screen appearances, as a ruthless wrestler.

Joe Robinson hit the headlines in 1998 when he fought off a gang of eight muggers single-handed. The 70-year-old former bodybuilder and Italian epic star was getting off a bus in Cape Town, South Africa when the gang struck with baseball bats and knives. Robinson poleaxed two with flying kicks, karate-chopped another in the chest and broke the arm of a fourth. The rest fled.

A Kid For Two Farthings 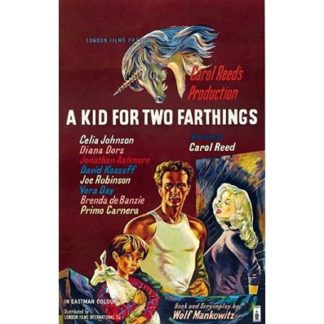