Talion (Robert Lansing) is a retired bounty hunter with many enemies who still want him dead. When Talion is away from his farm three wanted men, Ike Slant (Slim Pickens) and the Beetson brothers (Henry Wills and Jerry Gatlin), burn Talion’s farm. Talion returns to see his house ablaze and his family dead, so he sets out to track the bad guys and kill them. On the way he strikes a friendship with a young bounty hunter, Benny Wallace (Patrick Wayne), who also is tracking the Slant gang. They join forces and come across a trading post, run by Brian Quince (Paul Fix), where they stay overnight. Talion falls in love with Quince’s daughter, Bri (Gloria Talbott). The next day they find the camp where the Beetson brothers are waiting for their leader to return. Talion and Benny Wallace set up an ambush and wait for Ike Slant to return to his gang. When Ike Slant finally shows up all hell breaks loose. Also with Clint Howard and Strother Martin.

Paul Fix played Doctor Piper in the second Star Trek pilot, “Where No Man Has Gone Before”.

An Eye For An Eye aka: Talion 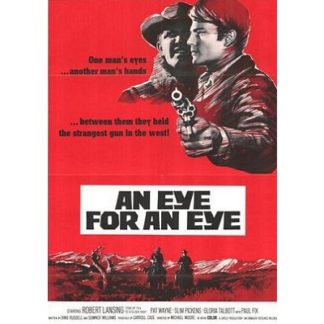