A team of astronauts land on the moon of Jupiter and find it populated with beautiful young women looking for mates. An old man (Owen Berry) explains to the explorers about their civilization, as well as the moon’s dangers. Such as a beast with the head of a man (Richard Walter) whom is indestructible. Stars Anthony Dexter, Paul Carpenter and Susan Shaw.

Lovely British blonde actress, Susan Shaw, was groomed by the Rank Organization in England for a career in films during the 1940’s and 1950’s. Her husband, American actor Bonar Colleano, would later die suddenly in a tragic auto accident on August 17th. 1955. After Bonar died, Susan was never quite the same and spent the remaining years of her life battling a drinking problem until her death from cirrhosis of the liver on November 27th. 1978. She died penniless at the age of 49 and her funeral was paid for by the Rank Organization. 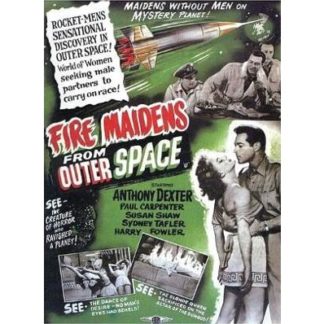