The crew of an interstellar police ship is sent to recover a mysterious crystal, the Blue Star. The ship’s female android (Dorothy Stratten) and a crew member (Stephen Macht) fall in love. Among others, the film Alien (1979) is spoofed, as the captain (Avery Schreiber) gives birth to a creature (Angelo Rossitto) who grows up on the ship thinking the captain is it’s mother. Also with Susan Kiger, Marilyn Joi and Rhonda Shear.

Now from a remastered 35mm print in excellent picture quality.

This was one of Playboy Playmate, Dorothy Stratten’s last screen appearances. On August 14th, 1980, Dorothy was shot in the face by her ex-husband Paul Snider. Afterwards, it was determined that he had intercourse with her dead body and then turned the gun on himself in a murder-suicide. Ironically, this film was released on the same day as her death in some states. 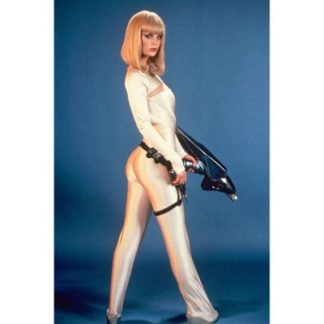