aka: Perils Of Nyoka

Professor Campbell's (Forbes Murray) expedition into the hills of Libya obtains a papyrus which might reveal the hiding place of the Golden Tablets of Hippocrates, which contains lost medical secrets. Also in the region is intrepid Nyoka Gordon (Kay Aldridge), still seeking her father, lost on a previous expedition. She alone can translate the papyrus, which directs our heroes through deadly perils, including the Tunnel of Bubbling Death, into the land of the Tuaregs. Opposing them are Vultura, Queen of the Desert (Lorna Gray), and her Arab ally Cassib (Charles Middleton), both greedy for the treasure. Also stars Clayton Moore.

Nyoka And The Tigermen aka: Perils Of Nyoka 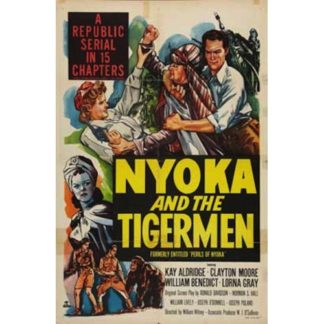