For the most part, it’s a fairly straightforward revenge yarn in which Judy Lee (aka: Ling Chia) sets out to avenge the massacre of her family by the Emperor’s men. She is also assisted by another female martial artist, played by Chung-Erh Lung. The two eventually infiltrate the Emperor’s court by posing as maids. Carter Wong plays yet another kung fu fighter, sent by the monastery where Judy was raised, to assist the two ladies. Things take a turn for the ridiculous with the mid film introduction of two characters with very long tongues (that look like red plastic neckties sticking out of their mouths) and their trained kung fu fighting gorillas! The gorillas are actors in what must be the poorest, most moth eaten ape suits ever seen on film, yet you are supposed to believe that they are actually real gorillas! The two leading ladies fight the gorillas at the end, before taking on the king (whose relation to the aforementioned Emperor is never explained). Also stars Tao-Liang Tan (aka: Flash legs) and with Hung Lieh Chen.

Be the first to review “Shaolin Invincibles (1977)” Cancel reply 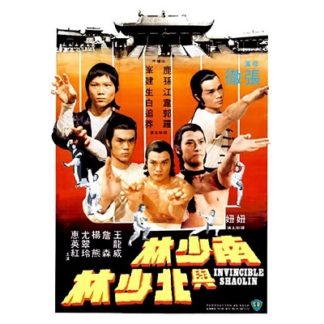