Ganor (Mario Feliciani), the leader of the Desert People, murders Sandor, the Sultan of Baghdad, and imprisons his eventual heirs, Daykor (Manuel Gallardo) and Soraya (Michèle Girardon), thus becoming the sole power in the country. Anthar (Kirk Morris), a young rebel, manages to get Soraya free. Eventually, she is captured by Akrim (José Jaspe), a slave merchant, who sells her to Kamal (Renato Baldini), a wealthy Sheik. Soraya refuses to be the Sheik’s girl, and plunges from a tower into the river – where she would have drowned if Anthar would not appear to save her once more. Together they go to Baghdad, where Anthar gets Daykor out of prison. But Ganor captures Anthar, and sets him to fight a rhinoceros to get rid of the freedom fighter. Daykor and Soraya return to Baghdad at the head of the revolted people, and after a siege, they take the city and joining with Anthar, will finally prevail over the tyrant. (In Italian language, with English subtitles).

This film came from a widescreen Spanish import print in excellent picture quality. 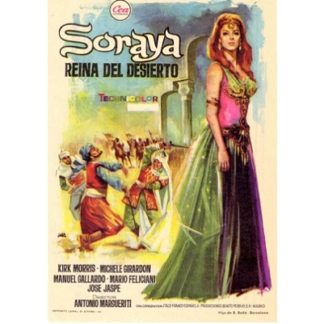