Co-ed confessions abound in this Roger Corman quickie about a rich and beautiful sorority sister named Sabra (Susan Cabot) whose self-centered maliciousness makes her extremely unpopular. Her only “friend” is an overweight pledge named Ellie, whom she constantly abuses, and in one scene she even beats her sadistically with a paddle. When her roommate, Rita (Barboura Morris), finds out about the abuse, Sabra uses blackmail to stop her from reporting it. Later she embroils a pregnant pledge (June Kenney) in another blackmail scheme, this time against Rita’s boyfriend (Dick Miller). Basically, Sabra is just acting out because her callous, rich-bitch mother (Fay Baker) doesn’t love her.

On December 10, 1986, Susan Cabot was bludgeoned to death in her home in Encino, California by her son, Timothy Scott Roman, who suffered from dwarfism and psychological problems. Roman was subsequently charged with involuntary manslaughter and received a three-year suspended sentence.

Be the first to review “Sorority Girl (1957)” Cancel reply 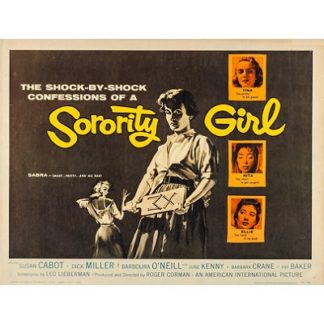