aka’s: The Trollenberg Terror/Creature From Another World/The Flying Eye

A remote mountain resort in Switzerland is invaded by horrible alien creatures that decapitate humans. The beings are also in telepathic communication with people and inhabit a mysterious, radioactive cloud at the base of the Trollenberg mountain. Stars Forrest Tucker and Janet Munro.

John Carpenter has said that this film, with its creatures hidden in the clouds, was the inspiration for his film The Fog (1980).

Cute, spunky, almond-eyed British actress Janet Munro was deemed to be an actress from day one as the daughter of a stage comedian. She grew up on British TV and was dubbed “Miss Television of 1958” by her fans. But after this Golden Globe winner tried to alter her wholesome image with more mature, spicier roles as unhappy, downtrodden women, audiences didn’t respond kindly to this suddenly very mature and adult Janet Munro. Despite a BAFTA nomination for her role in Life For Ruth (1962), she began to see her career unraveling before her very eyes. Worse yet, she developed an acute alcohol problem to combat her unhappiness. Her marriages to actors Tony Wright and Ian Hendry fell by the wayside and two miscarriages only deepened the suffering. Ironically, one of Janet’s last screen roles was as a boozing pop star in the British film Sebastian (1968). Four years later, on December 6th. 1972, Janet was dead. The immediate cause of her death was acute myocarditis, the underlying cause was chronic ischemic heart disease. She was only 38.

The Crawling Eye aka’s: The Trollenberg Terror/Creature From Another World/The Flying Eye 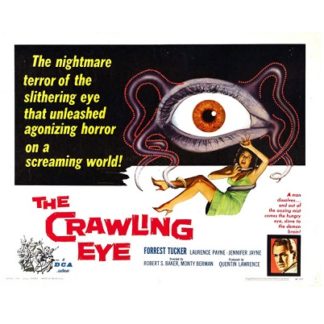