In this world of international espionage where loving men is against the law, the stunning Su-Muru (Shirley Eaton) is globally known as the most diabolical, bizarre and sadistic woman who ever lived. Her all-female, man-hating Amazon cult kidnaps a CIA agent (Frankie Avalon) as part of their plot for the destruction of all mankind. Klaus Kinski steps in with possibly the strangest role of his career, as the creepy homosexual president of Sinonesia who gets turned to stone! Also with George Nader.

The picture quality for this film is rather soft, but still the best available anywhere.

Be the first to review “Million Eyes Of Sumuru, The (1967)” Cancel reply 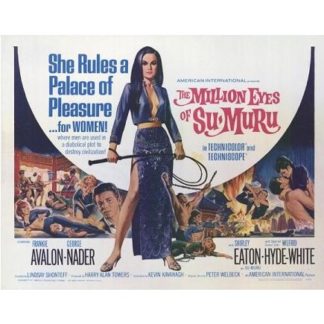