A young baby Pauline (Pamela Austin) is left on the doorstep of the Baskerville Foundling Home and is taken in and duly raised. George Steadman (Pat Boone), a boy roughly her own age, falls in love with her and foils all attempts to have her adopted out. Kicked out, he goes in search of his fortune so that he can return and earn Pauline’s hand in marriage. Pauline then gets a job tutoring a young prince in the Middle East, only for the prince to decide he wants her in his harem. Fleeing, she goes from peril to peril where she is sold to pygmies in Darkest Africa, is rescued by a 99½ year-old millionaire who wants to freeze her so that his one year-old grandson can marry her in 25 years time and later becomes a movie star and goes into space as a Russian cosmonaut. While all the time she is pursued by mad, big game hunter, Sten Martin (Terry Thomas). Finally, her beloved George comes to rescue and reunite with her. Also with Kurt Kasznar.

The Perils Of Pauline 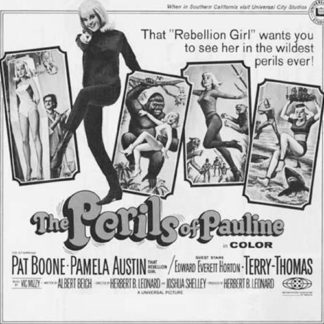