The young Bruce Lee (Bruce Li) has studied the philosophy and art of kung fu since boyhood, but his girlfriend says that he lives in a world of his own and all he thinks of is fighting. She begs him to change his ways, yet after a humiliating defeat Bruce vows that it will never happen again and, while witnessing street thugs preying on innocent people, he is driven to defend them. Things appear to be no better when Bruce comes to the United States to begin teaching and is under constant attack by rival martial artists, but all the while his unorthodox style is beginning to catch on. Finally he becomes an international sensation as a movie star with a wife, kids, money and everything he’s always wanted–who then must fight for both his life and his reputation back home in Hong Kong. 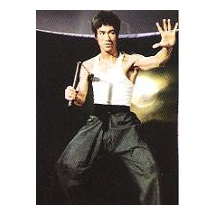