The beautiful and lusty Sharon Tate heads an all-star cast in her last film role. Mario (Vittorio Gassman), a young philanderer, receives 13 antique chairs in poor condition by inheritance and decides to sell them off to get some money. Afterwards he discovers that one of them contains a large sum of money hidden beneath the cushion of one of the chairs. So then he begins an adventurous trip with Pat (Sharon Tate) to regain possession of the chair. On the way they meet many strange people who would like to help or to swindle them. Also stars Orson Wells.

This film was to be Sharon Tate's last screen appearance. On the early morning of August 9th, 1969, during a quiet night with friends, four of Charles Manson's family minions crawled into her house at Ceilo Drive and systematically murdered the occupants: Sharon, Jay Sebring, coffee Heiress Abigail “Gibby” Folger, Gibby's boyfriend Woijech (Voytek) Frykowski and Steven Parents, a visitor of the caretaker, William Garretson. The baby Sharon carried died with her as well. 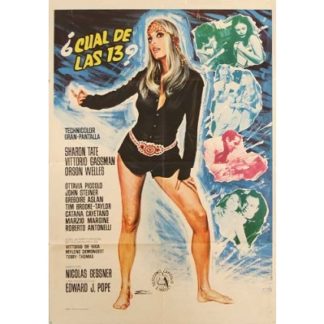