Concerns a group of American soldiers and Italian partisans active in northern Italy during World War II. At first the two groups fight separately. The American army patrol is bravely holding out against the Germans, but they are losing men and will not be able to continue for long. Meanwhile, the partisans are fighting their own battles. Finally, the two groups finally join forces to do battle with the Germans. Stars Larry Mann, Jon Cedar and Victor French. Also with Majel Barrett (of Star Trek fame).

A heavy smoker, Victor French was diagnosed with advanced lung cancer in April 1989, from which he died two months later on June 15, 1989 in Los Angeles, California.

Majel Barrett died on December 18, 2008, at her home in Bel Air, Los Angeles, California, as a result of leukemia. She was 76 years old.

The Quick And The Dead 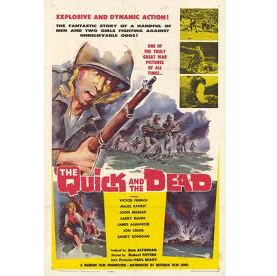