An angel-faced gunfighter (Giuliano Gemma aka: Montgomery Wood) is hired by a small farming family to infiltrate a ranch overrun by Mexican bandits and to save their hostages, including the fiancée of the local sheriff. Also stars Fernando Sancho, Lorella De Luca and Nieves Navarro (aka: Susan Scott). Also with Antonio Casas and George Martin (aka: Francisco Martínez Celeiro). (In English and Italian language, with English subtitles for the Italian language sequences).

On October 1st, 2013, Giuliano Gemma died following an auto accident near Rome. He was taken to a hospital in Civitavecchia and pronounced dead shortly after his arrival. Two other passengers, a man and his son, were also injured in the accident. Gemma was 75.

A Pistol For Ringo aka’s: Eine Pistole Für Ringo/Una Pistola Per Ringo/A Gun For Ringo/Ballad Of Death Valley/Ringo: The Killer 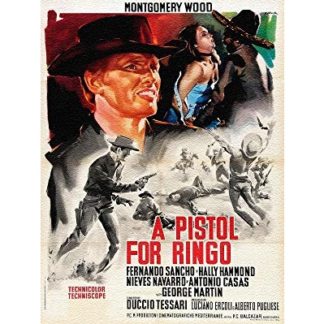