In medieval France, traveler Pygar (Robert Woods) tells he-man Karzan (Maciste in the French version – played by Val Davis) of his recent journey to a place called Antigua, and of its entire community of Amazons promising undreamed of sexual satisfaction to any man who comes upon them. More importantly, Pygar tells of a fortune in gold. Karzan/Maciste is persuaded to undertake the journey in search of riches, unaware that Pygar is in collusion with the Amazon Queen to actually deliver Maciste as a slave stud to help rejuvenate the race. The expedition is ambushed, Maciste is placed into the Amazons' service and Pygar, along with one of the Amazon women, Yuka (Lina Romay), attempt to swipe a fortune in gold for themselves. (In French language and Uncut). 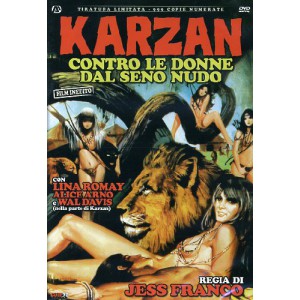