Those “naughty stewardesses” are at it again! But this time they’ve turned in their Mile High Club sky miles for a sexy, rousing, Old West-styled adventure on a dude ranch. Punchin’ cattle and breakin’ stallions are the last things on their minds as these lovely ladies earn their wings in a whole new way…blazing a trail straight to the bedroom. Stars Yvonne De Carlo (aka: Lily in The Munsters), Robert Livingston and Don “Red” Barry. Also with Regina Carrol, Connie Hoffman and Marilyn Joi. Directed by Al Adamson.

Originally, the film was to have starred the then-current incarnation of The Three Stooges, but last surviving original Stooge Moe Howard was too ill to perform, which led to the Ritz Brothers being brought in as replacements for the March 1975 filming. Moe Howard died on May 4, 1975 (age 77).

Be the first to review “Blazing Stewardesses (1975)” Cancel reply 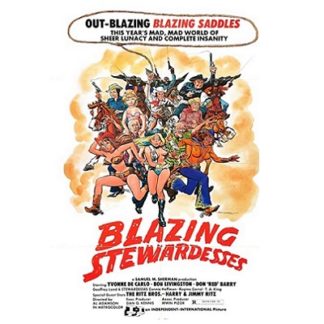