Consists of four complete segments, each directed by a master filmmaker: Federico Fellini, Luchino Visconti, Vittorio De Sica and Mario Monicelli. In Monicelli’s story, Renzo And Luciana, an office worker (Marisa Solinas) must marry her boyfriend when she gets pregnant–although marriage is against company rules. Fellini’s segment, The Temptation Of Dr. Antonio, tells of a critical prude (Peppino de Filippo) who becomes incensed at the presence of a billboard featuring a sexy portrait of a model (Anita Ekberg) selling milk–a portrait that comes to life. For this bizarre escapade, Nino Rota composed an advertising jingle that will stick in your mind whether you want it to or not. Visconti’s The Job is the best segment, tracking the emotional chess game between a playboy (Thomas Milian) and his wife (Romy Schneider) after he is publicly exposed in a sex scandal. Finally the De Sica piece, The Raffle, is a fairly broad romp that uses Sophia Loren as the reward in a raffle. 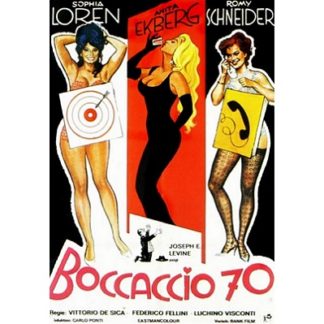