A blind sculptor (Boris Karloff) works on his magnum opus, unaware that the skeletons he has been using for armatures, are the remains of the victims of his evil wife (Viveca Lindfors) and that he is the next target. Also stars Jean-Pierre Aumont

This was Boris Karloff’s last film. Since the early 1960’s, he’d been afflicted with respiratory problems and frequently retired to a wheelchair and an oxygen mask between scenes. He died from emphysema on February 2, 1969, still a much beloved screen star.

Be the first to review “Cauldron Of Blood (1971)” Cancel reply 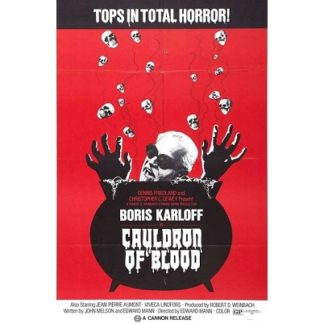