Sold separately, click on either title below to purchase for $19.99, or select the entire set here for $29.95, which includes both films shown here.

Willard (1971)
A social misfit, Willard (Bruce Davison), is made fun of by his co-workers and squeezed out of the company started by his deceased father by his boss. His only friends are a couple of rats he raised at home, Ben and Socrates (and their increasing number of friends). However, when Socrates is killed at work, Willard goes on a rampage, using his rats to attack those who have been tormenting him. Also with Ernest Borgnine, Elsa Lanchester and Sondra Locke.

Ben (1972)
A lonely boy, Willard (Lee H. Montgomery), is good friends with Ben, a rat. Ben is also the telepathic leader of a pack of other trained killer rats which do his bidding. Also with Joseph Campanella, Arthur O'Connell, Rosemary Murphy, Meredith Baxter and Paul Carr.

Be the first to review “Killer Rat Set” Cancel reply 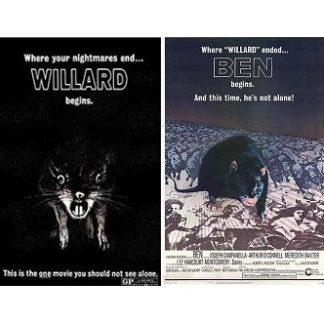