China O’Brien 2 picks up about two years after part 1 leaves off. While China (Cynthia Rothrock) has cleaned up her small town, a big time drug dealer (Harlow Marks) has escaped from prison, and the guy who sent him away (Frank Magner) just happens to be living in witness protection in her town with his wife (Tricia Quai) and her daughter (Tiffany Soter), the wife who happens to be China’s friend, and the daughter who happens to be dating Dakota (Keith Cooke). It’s just the drug dealer’s dumb luck that of all the small towns in all the world, the guy who ratted on him and made off with his $5 million would choose the one that has China, Dakota, and Matt Conroy (Richard Norton) in its police force.

Throughout the movie (most notable in final sequences), Dakota wears different headbands in consecutive scenes.

The stunt double for Cynthia Rothrock is a male with hairy arms and an unconvincing blonde wig. 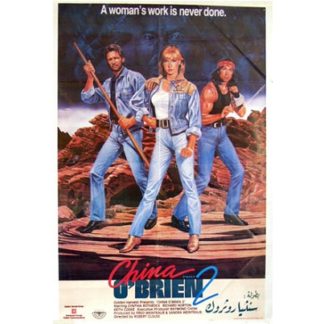