Commander USA's Groovie Movies was a hosted film showcase that ran weekend afternoons on the USA Network. The show premiered January 5th, 1985 and ran through 1989. It was hosted by Jim Hendricks as “Commander USA” (Soaring super hero! Legion of Decency – Retired), a wacky but slightly seedy blue-collar comic book superhero who occasionally displayed powers such as “microwave vision” (usually to prepare a mid-film meal of fish or eggs). The show originally ran double features of horror and science fiction films on Saturday afternoons, then later a single feature on Sunday afternoons. Later films on the show tended to be Mexican wrestling films or heavily-edited violent films from Japan. ~ Wikipedia, the Free Encyclopedia

Feature film: Mako, Jaws Of Death (1975)
aka: The Jaws Of Death
Filmed without the benefit of cages or mechanical sharks to offer protection! A man (Richard Jaeckel) who is studying sharks learns to communicate with them. When they are hunted and killed, he turns them against their captors. Plenty of graphic shark attack scenes. Also with Jennifer Bishop and Harold “Oddjob” Sakata. (Includes the original TV commercials from 1988). 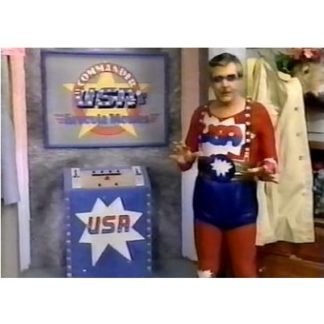