A multi-layered satire of race relations in America. Live-action sequences of a prison break bracket the animated story of Brother Rabbit, Brother Bear, and Preacher Fox, who rise to the top of the crime ranks in Harlem by going up against a con-man, a racist cop and the Mafia. Stars Barry White, Charles Gordone, Scatman Crothers and Philip Thomas. Al Lewis (aka: Grandpa in The Munsters) provides the voice of The Godfather.

Originally produced under the titles Harlem Nights and Coonskin No More…, Coonskin encountered controversy before its original theatrical release when the Congress of Racial Equality criticized the content as being racist. 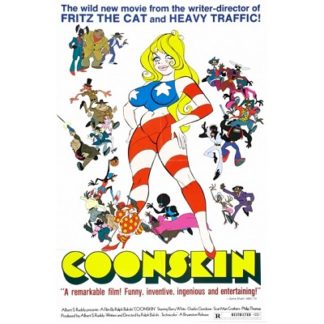