aka: Deranged: Confessions of A Necrophile

A man (Roberts Blossom), living in rural Wisconsin, takes care of his bed-ridden mother (Cosette Lee), who is very domineering and teaches him that all women are evil. After she dies he misses her, so a year later he digs her up and takes her home. He then learns about taxidermy and begins robbing graves to get materials to patch her up, and inevitably begins looking for fresher sources of materials. Based closely on the true story of Ed Gein.

NOTE: This rare import print is completely uncut and in widescreen. The U.S. release is cut.

Edward Theodore Gein was a notorious killer. He was known to have killed two people, but was suspected of killing others. His crimes earned widespread notoriety after authorities discovered Gein had exhumed corpses from local graveyards and then manufactured gruesome trophies and keepsakes from the corpses.

On July 26th, 1984, Gein died from respiratory and heart failure, due to cancer, in Goodland Hall, at the Mendota Mental Health Institute in Madison, WI. His grave site in the Plainfield cemetery was frequently vandalized over the years. Souvenir seekers would chip off pieces of his gravestone before the bulk of it was stolen in 2000. The gravestone was recovered in June of 2001, near Seattle, WA and is presently displayed in a Wautoma, WI museum.

Deranged aka: Deranged: Confessions of A Necrophile 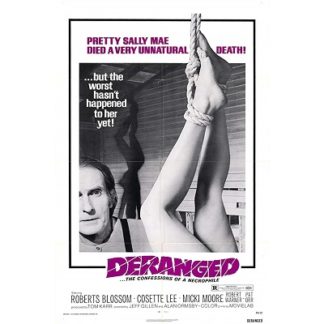