aka: Teenagers Battle The Thing

A high school teacher (Augie Tribach) and his class are having a discussion about Sasquatch (aka: Bigfoot). As the discussion is going on, another teacher (Dave Flocker) enters the class and tells the disbelieving students that he actually saw such a creature. He continues to explain that it not only was responsible for some deaths, but that it was also responsible for the nervous breakdowns of three of his students, who also saw the creature as well. He then goes on to tell the story about how he took his class on a archaeological dig, some fifteen years earlier. During the dig, they found a mummy (James T. Flocker) and foolishly removed it from it’s tomb. Incredibly, the mummy comes back to life and terrorizes a small town, killing some people in the process. Eventually, the monster is finally cornered, doused with gasoline, and then set ablaze. Stars Bob Clymire, Jan Swihart, Bill Simonsen, and Dennis Kottmeier. Also with Ruth Ann Mannella, Ken Kloepfer, and Mary Brownless.

NOTE: This film is an expanded, made-for-TV version, of a (1958) film titled Teenagers Battle The Thing, produced by the same actor, writer and director (Dave Flocker), which was originally only released in his home town. Flocker, who also appears in this version, is somewhat older in the newly added scenes, which were produced for the (1976) expanded TV edition. The rest of Curse of Bigfoot consists of the entire (1958) film, seen as a flashback. The original film focused on the resurrection of a prehistoric mummy-monster, and had nothing whatsoever to do with Bigfoot at all. It was later edited into this slightly longer, made-for-TV film, which played on late night television, beginning in (1976), to cash in on the then current Bigfoot craze, which was sweeping the country at the time. This film, which shows a roman numeral copyright date of (1963), is a real oddity, and it’s exact origins remain a mystery to this day.

This film comes from a rare 35mm print in very nice picture quality and is far superior to that of the horrible Film Detective version.

Curse Of Bigfoot aka: Teenagers Battle The Thing 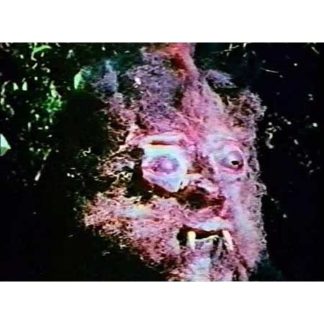