Judith Fontaine (Regina Carrol) is looking for her sister Joanie (Maria Lease), who has disappeared into the hippie community of Venice, California. It turns out Joanie has become the victim of Groton (Lon Chaney Jr.), an axe-wielding homicidal maniac working for Dr. Durray (J. Carrol Naish), who is really the last of the Frankensteins and is now running a house of horrors by the beach and is performing experiments on Groton’s victims. One night Count Dracula (Zandor Vorkov) visits the doctor, showing him the original Frankenstein creation that was buried in a nearby graveyard. The doctor revives it and uses it to take revenge on his professional rivals. Also with Russ Tamblyn and Jim Davis (of Dallas fame). Directed by Al Adamson.

This film was Lon Chaney’s last screen appearance. He died on July 12, 1973 from beri-beri and liver failure. His later years were bedeviled by illness and problems with alcohol. When he died from a variety of causes in 1973, it was as an actor who had spent his life chasing the fame of his father, but who was much beloved by a generation of film-goers who had never even seen his father.

Director Al Adamson was to die under tragic circumstances. On August 2nd, 1995, his body was found buried under the freshly laid cement and tile of his bathroom after someone had informed the police they saw someone “burying something” on the property. His murderer, Fred Fulford, posed as Adamson (for about two weeks) using Adamson’s clothes and credit cards at a hotel in Florida while on the run. Fulford was convicted soon afterwards and sentenced to 25 years to life.

Be the first to review “Dracula vs Frankenstein (1971)” Cancel reply 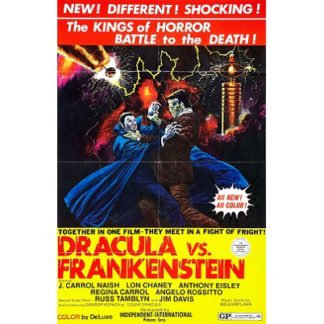