aka: It Came Without Warning

An evil alien invader (Kevin Peter Hall) lands in a rural, remote, wooded area and attacks the locals with his flesh-eating, leech-like flying parasites and stores them in a shed for later study. Stars Jack Palance, Martin Landau, Cameron Mitchell and Neville Brand.

This film comes from an uncut import print.

Kevin Peter Hall was involved in a major car accident in Los Angeles. During surgery for his critical wounds, he received a blood transfusion contaminated with the AIDS virus. He died shortly thereafter of complications from AIDS on April 10th, 1991. He was 35.

This 7'2″ giant's face was rarely seen in his films, as he usually played monsters and semi-human creatures which required him to wear mounds of make-up, so few people knew that he was a handsome and muscular man underneath.

Be the first to review “Without Warning (1980)” Cancel reply 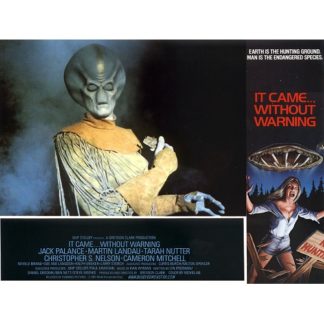