In the year 1985, after discovering a communications device from the planet Venus containing a message for an impending attack against Earth, an international crew of astronauts and scientists embark on the first manned expedition to the mystery-shrouded planet. Upon arrival, they discover the ruins of an advanced civilization that destroyed itself in its zealous quest to master atomic weaponry. Stars Yoko Tani, Oldrich Lukes and Ignacy Machowski. (Made in East Germany).

In the U.S. version of this film, on the soundtrack, in a scene in the control room of the Kosmokrator rocket, you can hear a music track titled “In Outer Space” lifted from Destination Moon (1950) by Leith Stevens, and later in the film, for the shots of the eerie destruction of the Venusian city, you can hear a music track titled “Metaluna Catastrophe” lifted from This Island Earth (1955) by Herman Stein. Both of these uses of music were uncredited, unlicensed and unauthorized by the copyright holders.

Be the first to review “First Spaceship On Venus (U.S. Version) (1962)” Cancel reply 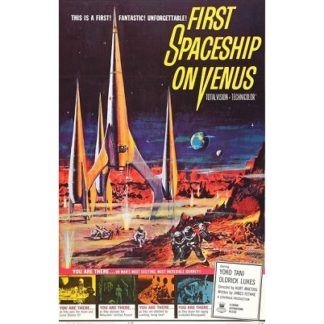