Goliath (Gordon Scott) must save the kidnapped women of his village from an evil zombie leader who needs their blood to feed his soldiers. Also stars Leonora Ruffo and Gianna Maria Canale.

This film comes from a nice widescreen import print.

For the last two decades of his life, Gordon Scott was a popular guest at film conventions and autograph shows. His manner of making a living for the last forty years of his life is unclear. Aside from autograph shows and selling occasional souvenir knives, he did not seem to have been employed. He spent much of his final years living with fans who remembered him from his Tarzan days. Scott died on April 30th, 2007 in Baltimore, MD at Johns Hopkins Hospital, from lingering complications due to multiple heart surgeries earlier in the year. Estranged from his family, he was survived by two sisters and a brother, none of whom had seen him in years. 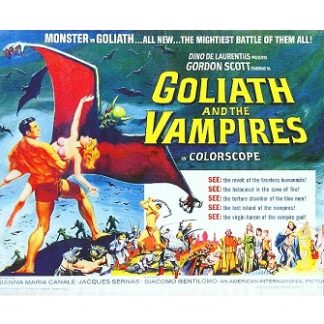