In the year 1999, all the Earth's giant monsters (Godzilla, Rodan, Mothra, Angilas and Minya, among others) are incarcerated on a small island near Japan. The Kilaaks, a race of aliens from a small planet somewhere in the asteroid belt, release the beasts and send them to trample the cities of our world. An Earth spaceship must penetrate the aliens' moonbase and take control of the monster army before a final confrontation with the space dragon King Ghidrah who threatens to annihilate the planet. Starring Akira Kubo, Jun Tazaki, Yukiko Kobayashi and Yoshio Tsuchiya. Also with Andrew Hughes, Kenji Sahara, Kyoko Ai (as the leader of the Kilaaks) and Haruo Nakajima as Godzilla/Military Advisor.

Andrew Hughes was appointed by international court to defend Japanese war criminals after World War II. After successfully defending several of his clients, Japanese film companies repaid their debt to him by landing him film roles.

NOTE: This very rare print features the original A.I.P. English audio dub from the late 1960's, which is far superior to all other English-dubbed versions which came after. This is also the best print, concerning picture quality, that you will ever see for this very rare English language version. 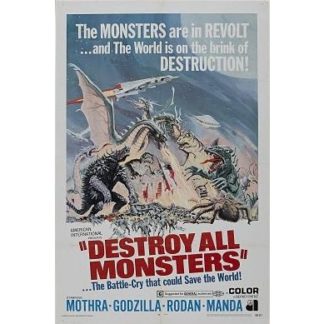