Word of a monster ape ten stories tall living in the Himalayas reaches fortune hunters in Hong Kong. They travel to India to capture it, but wild animals and quicksand dissuade all but Johnny (Li Hsiu-Hsien), an adventurer with a broken heart. He finds the monster and discovers it's been raising a scantily-clad woman, Samantha (Evlyne Kraft), since she survived a plane crash years before that killed her parents. Johnny and Samantha fall in love. Then Johnny asks her to convince “Utam” to go to Hong Kong. Lu Tien (Feng Ku), an unscrupulous promoter, takes over: Utam is in chains for freak show exhibitions. When Lu Tien assaults Samantha, Utam's protective instincts take over and wreaks havoc in Hong Kong.

Evelyne Kraft died at the age of 57 from heart failure on January 13, 2009 in Islisberg, Kanton Aargau, Switzerland.

Be the first to review “Goliathon (1977)” Cancel reply 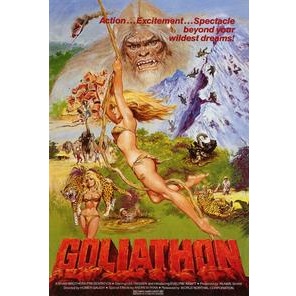