In this Taiwanese production, Hong Kong experiences a mysterious heat wave in mid-winter, the disappearance of gravity and strange earthquakes. Next a flying saucer appears over city. The occupants declare that nuclear testing in space is a threat to their safety and that mankind must surrender this technology. To show they are serious, three giant aliens appear and wreck havoc on the city. In desperation, the father of one of the scientists finds a special statue and awakens Guan Yu (The War God), who battles the aliens. Stars Gu Ming-Lun, Tse Ling-Ling, Cindy Tang Hsin and Chan Yau-San. (In Mandarin language, with English subtitles).

NOTE: The picture quality for this film is rather soft, but still the best print currently available anywhere. Also, in some instances, the English subtitles are cut off and rather difficult to read. 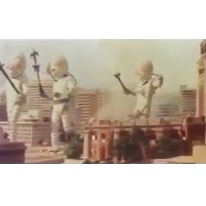