Chris (Aimée Eccles) is not getting along with boyfriend Sandor (Solomon Sturges) and has an affair with parole officer Dennis (Jeffrey Pomerantz). Dennis invites the couple to dinner with his ex-girlfriend Jan (Victoria Vetri). At a picnic on the beach, Jan meets lifeguard Phil (Zack Taylor), who later sleeps with Chris and moves in with the other five. Phil brings in a lawyer, Elaine (Claudia Jennings). The “group marriage” of the six of them attracts media attention, and complications ensue. Also with Jayne Kennedy.

The top four female leads in this film all appeared in Playboy Magazine, three on the cover. Victoria Vetri was the Playmate for September 1967 (using the name Angela Dorian) and the Playmate of the Year 1968, appearing on the cover of the May 1968 issue. Claudia Jennings was the Playmate for November 1969 and Playmate of the Year 1970, appearing on the June 1970 cover. She also appeared on the November 1974 cover. As part of the promotion for the film Pretty Maids All in A Row Aimee Eccles appeared in the pictorial “Roger Vadim’s Pretty Maids” in the April 1971 issue. Jayne Kennedy appeared in a pictorial (not fully nude) in the July 1981 issue, including the cover, promoting the film Body And Soul.

Be the first to review “Group Marriage (1973)” Cancel reply 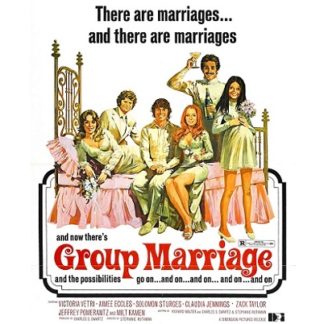