A young girl is killed on a popular beach in Malibu. Professor Otto Lindsay (Jon Hall) suspects that some form of mutated fish is responsible for the death. However, his son Richard (Arnold Lessing), who was a good friend of the girl, thinks it might be a madman with a grudge against him and his friends. Soon the list of victims begins to grow to include one of Rich's surfing buddies, Rich's bitchy stepmother Vicky (Sue Casey) and his friend Mark (Walker Edmiston), who had earlier been crippled in an auto accident.

NOTE: This film was released in theaters in 1965 and aired on television in 1966. This version is the rare, extended TV print, which goes under the title Monster From The Surf, which includes 8 minutes of additional footage not seen in the theatrical print which played in theaters under the title The Beach Girls And The Monster.

This turned out to be Jon Hall's last film. When he was stricken with bladder cancer later in life, Hall's health declined to a point that he found unbearable. Then, after telling friends that the pain of his illness was overwhelming, he committed suicide by shooting himself in the head on December 13, 1979. Hall's last public appearance was just a few months before his death, at the premiere of Hurricane (1979), a remake of The Hurricane (1937), in which he starred.

Monster From The Surf aka’s: The Beach Girls And The Monster/Invisible Terror/Surf Terror 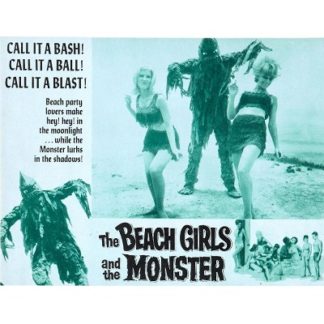