aka’s: Death On The Run/Bersaglio Mobile

A teenage musician’s family is moved under witness protection while he is away at band camp. When he returns home early and finds them missing, his search is obstructed by the fact that the mob is also trying to track down his family through him, but the police too are trying to find him to reunite the family as well – and he is afraid of both. Stars Ty Hardin, Michael Rennie and Paola Pitagoraand. Also with Vittorio Caprioli and Gordon Mitchell.

This film is one of Michael Rennie’s last screen appearances. Rennie died at age 61 from emphysema and heart failure on June 10th, 1971.

Rennie had lived his final years in Geneva, Switzerland and in a stroke of irony, collapsed and died at his mother’s home in England, while visiting there to attend his brother’s funeral.

A heavy smoker, Rennie had respiratory problems for many years. During the run of the Broadway comedy Mary, Mary in the early 1960’s, he had to admit himself in the hospital several times for oxygen treatments. His voice also had to be dubbed in the 1968 film The Battle Of El Alamein, as well as other later appearances, due to his chronic health problems.

Be the first to review “Moving Target (1967)” Cancel reply 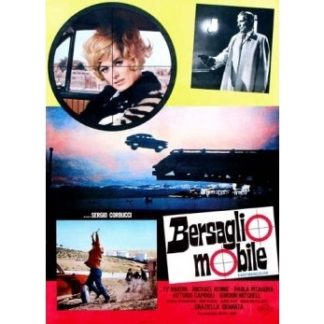