aka: The Silk Noose

Sugiani (Joseph Calleia), a black-market racketeer in London, following World War II, is amassing a vast fortune until Linda Medbury (Carol Landis), an American newspaper reporter, learns about him and his operation. She wages a crusade against Sugiani, and enlists the aid of her fiancé, “Jumbo” Hyde (Derek Farr), a former British Commando captain. Sugiania tries to buy her off but fails, and then threatens her life. Linda and Hyde get a gymnasium operator to lend them some fighters to storm Sugiani’s headquarters.

By 1948, Carol Landis’s career was in decline and her marriage with W. Horace Schmidlapp was collapsing. She entered into a romance with actor Rex Harrison, who was married to actress Lilli Palmer at the time. Landis was reportedly crushed when Harrison refused to divorce his wife for her. Unable to cope any longer, she committed suicide at her Pacific Palisades home on July 5, 1948 by taking an overdose of Seconal. She had spent her final night alive with Harrison. The next afternoon, he and the maid discovered her on the bathroom floor. Harrison waited several hours before he called a doctor and the police. According to some sources, Landis left two suicide notes, one for her mother and the second for Harrison who instructed his lawyers to destroy it.

Noose aka: The Silk Noose 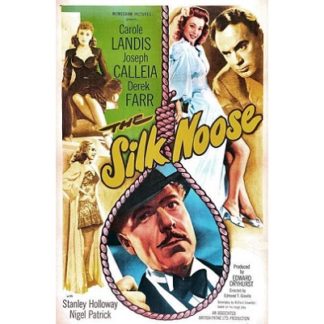