A gang of young motorcycle riders call themselves the Living Dead, terrorizing the population of their small town. After an agreement with the Devil, if they kill themselves, firmly believing in a resurrection, they will survive and gain eternal life. Following their leader (Nicky Henson), they commit suicide one after the other, but things don’t necessarily turn out as expected. Also stars Mary Larkin and Ann Michelle. Also with Beryl Reid and George Sanders.

This was to be George Sanders last screen appearance. Sanders had told British actor David Niven in 1937 that he intended to commit suicide when he got older. On April 25th, 1972, he fulfilled his promise, leaving this note: “Dear World, I am leaving because I am bored. I feel I have lived long enough. I am leaving you with your worries in this sweet cesspool. Good luck.” Just prior to that, after being convinced by a woman he had taken up with, Sanders sold his beloved house in Majorca, Spain. Then soon after, he checked into a hotel in Barcelona and two days later his body was discovered next to five empty tubes of Nembutal. He was 65.

Trivia: George Sanders famously stated that he loathed giving interviews because he didn’t get paid for them, never gave autographs and rather enjoyed being perceived as “a rude and disagreeable person.”

Be the first to review “Psychomania (1973)” Cancel reply 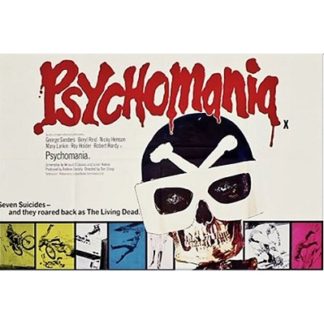