At last, the film which was suppressed for over 23 years has finally surfaced! Now it's your turn to see this controversial film and judge for yourself. Luce Habit (Rula Lenska) and her all-girl crew take a handsome boy-toy named Ray Fay (Robin Askwith) to a lost island in search of the giant female gorilla (actually played by a real female dancer). And boy do they find her! Before it's all over, London is in shambles. Also with Valerie Leon and Roger Hammond. Written and directed by Frank Agrama.

This film comes from a very nice widescreen import print.

NOTE: Because of legal difficulties with the owners of the copyright for the character of King Kong, this film was pulled from distribution and never released theatrically in the U.K. or U.S. after Dino De Laurentis (producer of the 1976 remake of King Kong) filed a court injunction against it soon after it's release. However, on December 10th, 1976, it was released for a very limited time in West Germany and briefly in Italy as well. It was also released in Japan, but not until September 22nd, 2001, where it now has a cult following.

De Laurentis also claimed in court that this film, which was a comedy-spoof that cost only $632,000 to produce, would seriously hinder his ability to turn a great profit on his then, soon to be released in December of 1976, $24,000,000 serious remake of the 1933 King Kong. He reasoned that if the public felt the character of Kong was something to laugh at, then his great epic could end up being a grand failure. Ironically, his expensive remake didn't earn back nearly as much as expected.

When this film was originally announced, producer Virgilio De Blasi and his company, Canaria Films, were given as Italian co-producers. However, the credits in the film fail to mention either.

Director Frank Agrama has stated in a past interview that the part of Queen Kong was actually played by a female dancer who did nothing but complain all through the making of the film, due to the difficulty of wearing the very hot and heavy fur suit.

Tagline: She's in one of her moods again! 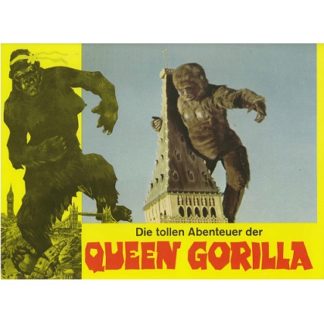