A wrong turn on a jazz singer’s (Leslie Uggams) road trip results in her car breaking down near an isolated lodge, run by a faded starlet (Shelley Winters) and a young homicidal Elvis impersonator. Also with Ted Cassidy and Slim Pickens.

Most of the individuals involved in the production were, at the time, nominally employed in the world of adult films, with the picture representing an opportunity to “go straight.” They secured backing from Michael Thevis, a notorious Atlanta-based businessman commonly known as “The King of Pornography” whose other interests included a chain of sex shops, a record company, and the manufacture of peep show booths. Further motivating Thevis was a desire to launder money he had made through dealings with various Mafia figures, which had attracted the attention of the FBI. Shortly after the film’s production, Thevis was jailed on an assortment of charges and, following a prison escape in 1978, was placed on the FBI’s most-wanted list. ~ Wikipedia

Be the first to review “Redneck County Rape (1975)” Cancel reply 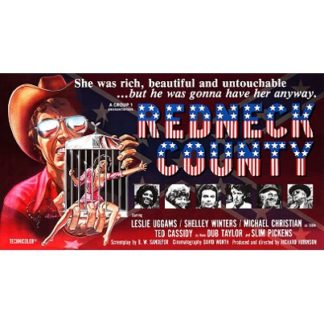