The denizens of an isolated fishing village are shocked when a photographer returns from an outing at a nearby creek with a photo of a Bigfoot-type creature he saw there. Stars Dawn Wells of Gilligan's Island fame and Dana Plato of Diff'rent Strokes fame.

In 1991, battling alcohol and drug problems, Dana Plato was arrested after robbing a video store in Las Vegas. She was given five years probation. But in 1992, she was arrested again for forging prescriptions for Valium. On May 8, 1999, Dana died of what appeared to be an accidental overdose of a painkiller called Loritab. Later, on May 21, a coroner's inquest ruled her death a suicide, due to the large amount of drugs in her body and her history of past suicide attempts. She was 34 years old. 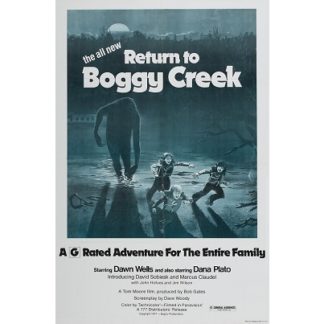