Kartal Tibet is Tarkan, a mighty barbarian warrior who travels around with his dog Kurt, saving pretty women from danger. He’s currently in the employ of the daughter of an important political person, who runs afoul of some bloodthirsty Turkish Vikings, who worship a man-eating octopus god-monster. Why do they want the girl? To sacrifice her to their demigod of course. Also stars Eva Bender and Seher Seniz. Also with Fatma Belgen and Bilal Inci. (In Turkish language, with English subtitles).

On September 9th, 1991, beautiful Turkish actress Seher Seniz was found dead in her home. Apparently, she committed suicide by drinking whiskey and taking sleeping pills. She left a suicide note that stated something to the affect of “no one is responsible for my death.” She was 43. 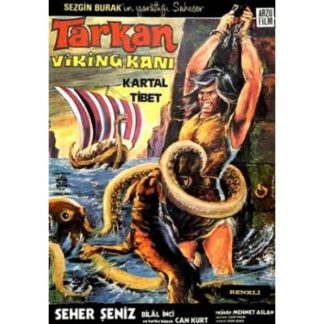