Unlike his model Santo, whose identity goes to the grave with him, Goldface is a much more straight-forward comic book superhero. By day he's mild-mannered scientist Dr Villar (Robert Anthony/Espartaco Santoni), but lurking just under the lab coat is Goldface, famous masked wrestler and crime fighter. True to the conventions of a Santo film, the costumed Goldface makes his first appearance at an extended wrestling sequence, not ten minutes into the film, and what a costume it is: Blue stocking suit (the obvious nod to Superman), gold mask (naturally), red cape and what appears to be a flaming vagina on his chest. The entire female audience ends up panting over him. One German journalist notes, “I wonder if he's so rough when he makes love!” Three wrestlers are thrown against him – The Panther, Jack The Ripper, and one called The Bouncing Ball – and are dispatched in rapid succession. The triumphant Goldface then heads to his corner to be massaged by his manservant Kotar (Big Matthews). Also stars Evi Marandi and with Micaela Pignatelli.

NOTE: The picture quality for this film is a bit soft, but currently the best print available anywhere. 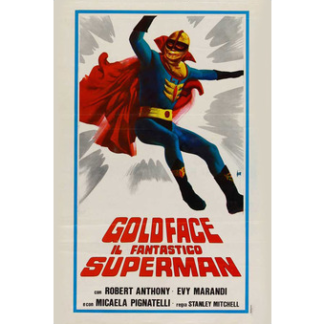