While working in Japan, an American reporter (Peter Dyneley) is sent to interview an eccentric Japanese scientist (Tetsu Nakamura) who is working on bizarre experiments in his mountain laboratory. When the doctor realizes that the hapless correspondent is the perfect subject for his next experiment, he drugs the unfortunate reporter and injects him with a serum that gradually transforms him into a hideous, two-headed monster. Gives new meaning to that old romantic song, Put Your Head On My Shoulder. Also stars Jane Hylton (Peter Dyneley's actual spouse) and Terri Zimmern.

This film was a co-production between the U.S. and Japan and is notable for its creative use of special effects and makeup.

British actor Peter Dyneley spent his early years in Canada, but was educated at Radley College. He had dual nationality, Canadian and British, and also served with the Royal Canadian Navy in WW II. With his Canadian background, he often performed with an American accent, typically in both Thunderbirds (1965-66) and the cult horror film The Manster (1962). Peter died on August 19th, 1977, after a long battle with cancer. He was 56. His wife, actress Jane Hylton, died from a heart attack only a couple of years later, joining him on February 28th, 1979. She was 51.

The picture quality for this film is far superior to all the other versions currently available elsewhere. 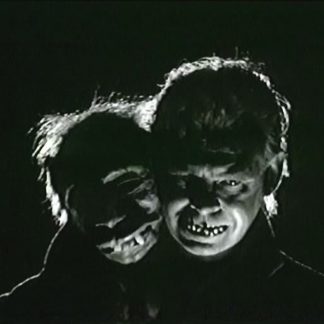