aka’s: Alien Massacre/Horrors Of The Red Planet/Journey Into The Unknown

In 1974, four astronauts, silver shoe-clad Dorothy (Eve Bernhardt), overweight Doc (Vic McGee), goofy Charlie (Jerry Rannow) and wooden Steve (Roger Gentry), crash land on Mars with only four days of supplies. They now must try to survive on the surface, which is barren except for some canals with huge maggots and fins. After embarking through a golden igneous cavern, braving a storm and finding an unmanned Earth vessel, they discover a golden road which leads them to ruins of what was once a beautiful Martian city. The Martians are modeled after the Flatheads of Oz and their collective consciousness, the “Wizard” (John Carradine), forbids them to leave until they perform a very small task.

The Wizard Of Mars aka’s: Alien Massacre/Horrors Of The Red Planet/Journey Into The Unknown 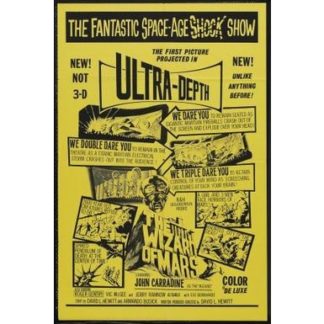