Sold separately, click on either title below to purchase for $19.99, or select the double set here for $29.99.

Turkish Star Trek (1974)
aka: Ömer The Tourist In Star Trek
“Turist Omer” is a series of films about a character who always winds up in bizarre situations. This time around, Omer gets mistakenly beamed aboard the Starship Enterprise, where he's dropped right into the middle of a Turkish imitation of the Star Trek TV episode “The Man Trap”. Like The Turkish Star Wars, this film shamelessly swipes special effects footage from the original! (In Turkish language). 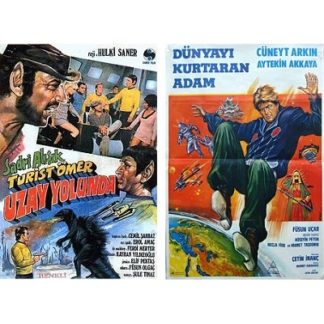