Zan (Steve Hawkes) helps the Amazons defeat two gangsters who wished to take over a sacred gold treasure from the women's tribe, who are led by their queen (Kitty Swan). There are extensive views of the Central America jungle and several tough battles between the young Amazons and the evil pirates. (In widescreen format).

During the making of the sequel to this film, Tarzan And The Brown Prince (also available here at Rare Movie Collector), Steve Hawkes and Kitty Swan were burnt in an on-set accident. The accident put an end to Hawkes' acting career.

Steve Hawkes went on to run an animal sanctuary out his home. On July 13, 2004, his pet tiger Bobo escaped from the compound in Loxahatchee, Florida and was shot and killed the next day by a Florida Fish and Wildlife Commission Officer, bringing national media attention to the incident. Hawkes believes the officer “murdered” Bobo needlessly. On July 19, 2004, 6 days after the incident involving Bobo, the house caught on fire. He recently had a new air conditioner installed, and it apparently malfunctioned and sparked the blaze. Fire crews had a hard time getting to the fire because Hawkes had electrical fencing to keep his other exotic animals caged in. But the fire was eventually extinguished, and all animals on the property were reportedly in good condition. 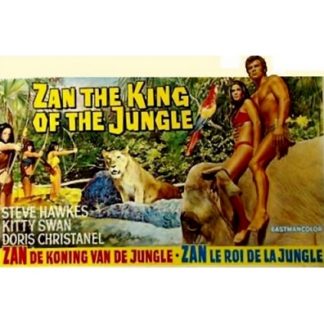