An increasing number of people are dying mysterious deaths in the dark waters of Loch Ness, victims of the famous monster. But what other mysteries does the Loch hold? Stars Sandy Kenyon, Miki McKenzie and Barry Buchanan (son of director Larry Buchanan).

NOTE: This is one of the last films produced by director Larry Buchanan. He was completing the editing of his last film at his home in Phoenix, Arizona when he died on December 2nd, 2004, two months shy of his 82nd birthday. He considered The Copper Scroll Of Mary Magdalene, a story based on a Gnostic interpretation of Christ, to be his finest film. The man who had turned down the chance to become a minister, had been working on the film since 1972. Returning to his roots, the film had became the goal of his career and was an expression of his artistic, as well as religious, passion. Buchanan was survived by wife, Jane, of 52 years and by his sons Randy, Barry, Jeff, and by his daughter Dee.

•Factual errors: There are no islands on Loch Ness.

•The downed Nazi plane and bodies can be clearly seen in the water. However, Loch Ness is filled with thick particulate peat and underwater visibility is about five feet.

Trivia: The Scottish castle scene was filmed at Vikingsholm, a private residence at Lake Tahoe. It was built as a summer home by Mrs. Lora Josephine Knight in 1929.

The island shown at the beginning of the film is called Fannette Island.

The film was actually shot in Lake Tahoe, California, not Scotland as depicted in the film.

The Loch Ness Horror aka: Nessie 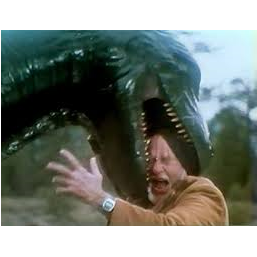