The uncle of an executed murderess (Vincent Price) relates four stories of his hometown, Oldfield, to a reporter (Beth Chandler): An elderly man (Clu Gulager) pursues a romance with a younger woman (Megan McFarland), even to the grave and beyond; a wounded man (Terry Kiser) on the run from creditors is rescued by a backwoods hermit (Harry Caesar) with the secret to eternal life; a glass-eating carny (Ron Brooks) pays the ultimate price for looking for love on the outside; and Civil War soldiers, led by Sgt. Gallen (Cameron Mitchell), are held captive by a household of orphans with strange intentions for them.

This film came from an uncut German import print in excellent picture quality.

Vincent Price later expressed a strong dislike for the film in a letter written to German actor and puppeteer Gerd J. Pohl. Price said that his agent misrepresented the project and that he was trapped in it.

From A Whisper To A Scream aka: The Offspring 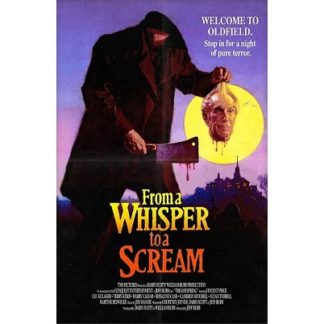